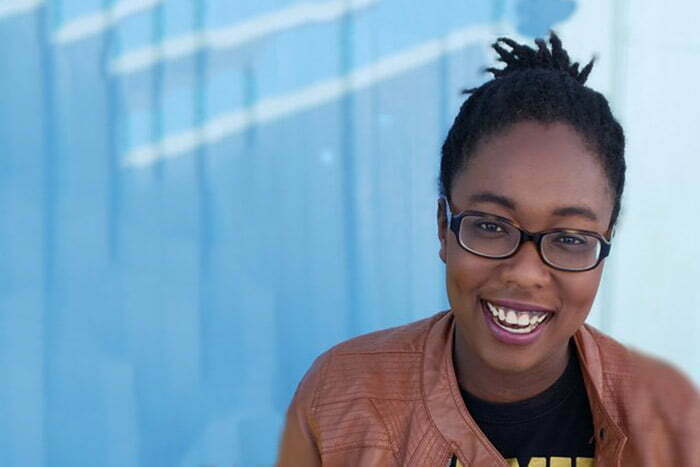 Growing up, Camille Eddy wanted to be an astronaut. She went to space camp, loved Star Trek, and was even mentored by former NASA mission specialist Barbara Morgan. Part of being an astronaut, Eddy discovered, involved developing STEM skills. So she began programming at age 12, started her own web design business at age 17, and went to Boise State University in Idaho to major in mechanical engineering. While most college students rely on loans or parental support to pay for their university housing, Eddy used the profits from her web design business.

Now, she works as a robotics engineer & developer at TIMBER IT consulting in Seattle and is a mechanical engineering/robotics major at the University of Idaho. She has interned at HP, where she designed a five-fingered robot, and at NVIDIA, where she worked on the development of self-driving automobiles. Notably, Eddy also interned at X, the moonshot factory—formerly Google X, a research & design facility—where she invented various mechanical apparatuses and helped maintain quality control.

As if that weren’t enough, Eddy writes regularly and speaks internationally on inclusion in the tech community. She sits on the board of directors of GIRL STEM STARS, whose mission is to foster excitement, confidence, and literacy in STEM for girls of color, particularly those from underrepresented communities. She is also a robotics instructor for lilSTAR, a STEAM program for underserved Black students in the greater San Diego area, for which she wrote a robotics curriculum that taught students how to build a robot complete with servos, motors, wheels, and Arduino technology.

Listing the rest of her accomplishments and volunteer experiences would take too long.

She’s done all this while working on her bachelor’s degree.

Last Friday, Eddy visited Omaha to give a keynote presentation at the Gender Equity in Technology Conference, or GETConf. Her talk, “Recognizing Cultural Bias in AI,” focused on identifying and reducing unwanted bias in machine learning. She discussed how culturally biased datasets can introduce unwanted bias into artificial intelligence. For instance, when researchers at Boston University and Microsoft Research used a Google-developed word database called Word2vec to complete the analogy of “man is to computer programmer as woman is to X,” the database evaluated X as “homemaker”—meaning any AI that learns from this database will inherit a sexism that humans would like to see eradicated, not reinforced.

“We must ensure that the world we live in today, with all its -isms…is not the world that artificial intelligence interprets for us tomorrow,” Eddy said during her keynote.

An Advocate for Women in STEM

When asked how to maximize the number of girls and women entering the tech talent pipeline, Eddy echoed some advice that had stuck with her over the years: “We don’t need to convince girls or women to go into tech, we need to create more environments where they feel welcome and acceptable, so that tech becomes a natural choice.”

“It’s also not just about getting them in, but keeping them in,” she added. That means strengthening retention in both degree programs and career fields.

And the tech pipeline itself is not the only consideration, she said. The jobs that lie at the end of the pipeline are just as vital.

“I think it’s really important that we’re providing careers that are satisfactory to whatever it is that we’re interested in. For example, my talk was on cultural bias in AI. But when I talk about that as a career path, I might get a couple stares. So making sure that if there are those types of careers that people are interested in, that we’re creating valid paths to them.”

As for Eddy’s own career trajectory, she wants to continue working at the intersection of hardware and software, particularly in robotics. She also wants to be a science and engineering communicator, someone like Carl Sagan or Neil deGrasse Tyson, she said—someone who popularizes STEM for a general audience.

Given her passion for the way humanity interacts with emerging technology, and her already extensive history as a speaker demystifying difficult subjects for audiences, Camille Eddy is someone to watch as she makes her own moonshot to the future.