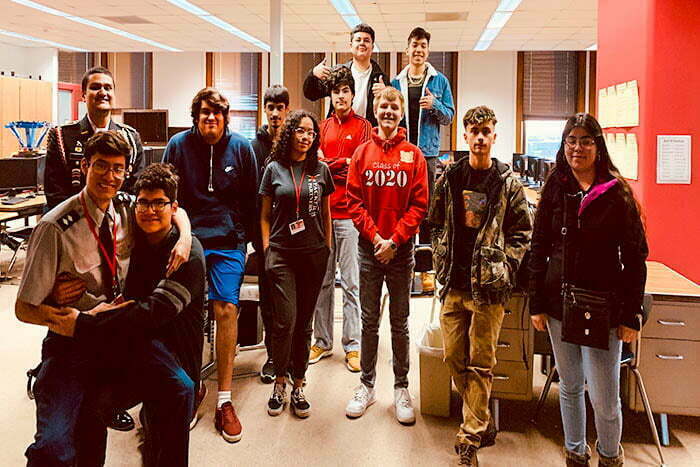 Ashok Fichadia, Assistant Vice President of IT Development for Union Pacific, said the company is delighted to play a role in the students’ technical development.

“Union Pacific adds to its talented workforce through both traditional and non-traditional avenues. We are excited about the internship program for students trained through AIM Institute and Omaha South High School. Getting access to a local, technically proficient workforce is mutually beneficial to both Union Pacific and the community,” said Fichadia.

The Union Pacific internships are the culmination of a journey that began in January when Poudel and Espinoza Macias, along with 10 other students, took part in an intensive coding curriculum taught by the AIM Institute. AIM is a nonprofit that provides programs to build the tech workforce in the greater Omaha area through no-cost tech education for youth, a code school, tech conferences, leadership development for IT professionals, an annual tech awards show and Silicon Prairie News.

No Senioritis for students learning to code

The program took place during a time when students are almost expected to be unmotivated: the last semester of high school. But not these students.

Espinoza Macias and Poudel both come from families with parents who did not attend college, something they have in common with most of the students AIM serves through its Youth in Tech programs.

Bolstered by the opportunities AIM’s pilot program has given them, Espinoza Macias will head to the University of Nebraska at Omaha this fall to major in cybersecurity, while Poudel takes a slightly different route pursuing a degree in IT innovation.

None of the other students who participated in the pilot program could be suspected of Senioritis either. They were all busy building their own websites, mastering the languages of HTML, CSS and Javascript first in the computer lab after school, and then at home on their very own laptops donated by Bricklayer.org.

“Even with the impact of COVID-19, students did not miss a beat in the training,” said Jim Mayberger, Career Technical Education Curriculum Specialist for Omaha South.

In fact, students had been required to interview for the class, knowing from the outset that they would not receive course credit, but an even better mark instead: the opportunity to enter a tech job right after graduation.

This arrangement proved powerfully motivating for students—and for employers calling for a stronger local tech workforce. Once word spread about the pilot program, conversation about internships and jobs arose in multiple companies, including some of the city’s most iconic enterprises. Union Pacific offered to interview and potentially place multiple students from the program into paid summer internships.

Job interviews make students nervous, but they receive helpful advice from mentors who know what it’s like

Eighty-three percent of the pilot program’s students competed for 2 internship spots. The process of interviewing with Union Pacific encouraged them to reflect on the technical abilities they’ve developed and start testing the professional communication skills they need to hone for their careers.

The students who landed the paid internships recall feeling simultaneously nervous and excited in the lead-up to their interviews.

Espinoza Macias said she received some valuable advice from AIM’s Vice President of Operations, Itzel Lopez, who called her the day before the interview in a show of solidarity.

“Mrs. Lopez gave me encouraging tips: to prepare, to dress formally, and to smile at the camera. It was really helpful,” Espinoza Macias said.

When Poudel first heard about the pilot program back in the fall of 2019, he didn’t know whether he wanted to participate. But he’d already participated in  completed the Mutual of Omaha App challenge during his junior year, and he figured expanding his skills could only help.

“I was not sure when I first heard about the program, but I wanted to continue gaining knowledge on the web development side,” said Poudel, whose dream is to become a Software Engineer or Entrepreneur later in life. Despite his nervousness, Poudel said the interview went smoothly. Learning he had been accepted for the internship was a great excitement for him.

As for the pilot program, 10 graduates will take a Java course to further expand their skill set in the fall. The Java curriculum allows students to supplement their existing front-end development knowledge with back-end programming experience. Such full stack developers, who can essentially do it all, are highly in-demand among employers.

Though its physical halls are closed for now, the virtual hallways of Omaha South buzz with excitement for next year, when the pilot program will expand into a year-long after school offering. And while it’s too early to tell, Mayberger expressed confidence about the program’s incoming students. “The seniors coming up this next year are really talented,” he said.

Omaha Gives! on Wednesday, May 20 offers a way to help more students learn to code

While the future looks bright for AIM’s Youth in Tech programs, for the students they serve and for the Omaha businesses who will benefit from this partnership, more students still need to be reached to level the playing field. Individuals and businesses can support tech education for underserved youth through Omaha Gives!, a year-round giving platform organized by the Omaha Community Foundation and presented by American National Bank that culminates in a 24-hour giving sprint. The minimum donation is $1, and there is no maximum. Omaha Gives! takes place this Wednesday, May 20. Visit AIM’s Omaha Gives page to help support the work we do.